SINTEF is an independent research foundation based in Trondheim and Oslo, Norway. Most of its income originates from contract research for industry and the public sector in Norway and internationally. SINTEF is the largest independent R&D organization in the Nordic countries, employing around 2000 people. Contract research carried out by SINTEF covers all scientific and technical areas, and ranges from basic research through applied research to commercialization of results into new products and business ideas, for both the domestic and international markets. SINTEF has participated in numerous research projects within the EU’s  Framework Programs.

The Microsystems and Nanotechnology Department (35 people), part of the SINTEF Digital institute, specialized in the design and fabrication of advanced sensors and actuators such as pressure sensors, accelerometers, gas sensors, flow sensors, biosensors, micro optical sensors, implantable medical sensors, etc. Microsystems are realized in a state-of-the-art automated 150 mm silicon clean room MEMS fabrication facility. The manufacturing laboratory produces microsystems for integration in customers’ commercial instruments, as well as prototypes for R&D projects. The laboratory is ISO 9001:2008 and ISO 14001:2004 certified. In microfabrication, the department’s strong points lie in bulk micromachining technology (specifically, DRIE based), thin film deposition (including piezoelectric films), bonding based packaging of sensor structures and design for manufacturing. The BioMEMS and Medical Sensors Group specializes in design and manufacturing of in vitro and in vivo biodiagnostics systems and miniaturized biosensors. 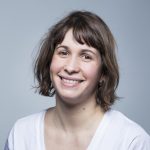 Dr. Elizaveta Vereshchagina is currently a Research Scientist at SINTEF where her key responsibilities include execution of research and development, project management and manufacture of (bio)micromechanical systems. Her research focuses on advancing micro and nano technologies for practical use in healthcare and environmental applications. She has a diverse background with a strong grounding in microsystems technologies, bioMEMS and lab-on-a-chip. She has work experience in five countries with world-class research institutes and a wide international network in the field.

Andreas Vogl works as senior scientist in SINTEF, which he joined after his study. He completed his Dipl. Ing. in electrical engineering at the University of Erlangen-Nuremberg, Germany, in 2002. His technological background is both electronic design and microtechnology. He works mainly with modelling and simulation of MEMS, especially piezoMEMS and with process integration of microsystems. He has been the coordinator of the EU FP7 project “EM-safety” and technical project manager of the ENIAC project “Lab4MEMS”. He has authored and co-authored more than 40 scientific articles and conference contributions and holds 3 patents.